This page is part of the FREE site located at http://logan.illinoisgenweb.org/. There is NO charge to access any page on this site. If you have arrived here through a pay site click here to go to the original free Logan County ILGenWeb site.

A MEETING IN MT. PULASKI
This picture has been identified as being that of an Old Settlers Meeting. My grandmother had the picture and on the back someone had carefully identified the men, probably my great grandmother. It includes the 21st Illinois Governor Joseph W. Fifer, 1889-1893, a Republican. This narrows the time frame. The two Old Settlers meetings held in Mt. Pulaski during that period do not include a mention of Governor Fifer being present. Whether this is an "old settlers" meeting or just a political meeting I don't know. I don't believe some of these people classify as "old settlers." I further note that prominent Democrats of the era are not present. While it looks like the meeting was on the courthouse lawn to many it has been identified as being in front of the Beidler home on Marion Street. That would make sense to me. Where there is disagreement about names I have included both. 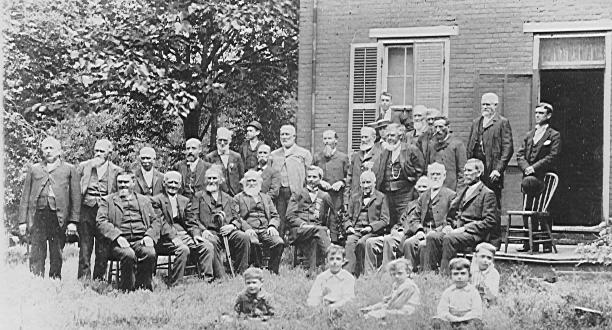 
This page is "A Meeting in Mt. Pulaski" on the Logan County, Illinois, ILGenWeb site. The address of this page is http://logan.illinoisgenweb.org/mpmeeting.htm.

All materials contained on these pages are furnished for the free use of individuals engaged in researching their personal genealogy. Any commercial use or any use for which money is asked or paid for any reason is strictly prohibited.